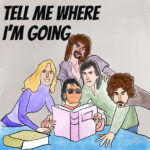 Tell Me Where I'm Going
Chapter 1 & 2: The Journey Begins

Chris introduces the concept of a collaborative fiction podcast, and shares the first two chapters of his story about an imagined past involving crime, carnivals, and The Traveling Wilburys.